The Federal Government has published an Exposure Draft of the Family Law Amendment Bill 2023 (“Bill”).

If enacted, the Bill would, amongst other things, significantly amend section 60CC of the Family Law Act 1975 (“Act”) (which section sets out the factors which the Court is required to consider when determining the best interests of a child).

The Bill would also repeal s 61DA (the presumption that it is in a child’s best interests for both of their parents to have equal shared parental responsibility), and section 65DAA (the requirement to consider making an order for equal time or substantial and significant time when the Court makes an order for equal shared parental responsibility).

Whilst I have not had time to fully consider those aspects of the Bill, I have spent a bit of time reading them and comparing them to what they would amend.

I have not yet taken the time to read the other parts of the Bill.

Section 60CC sets out the factors which a Court must consider when determining the best interests of a child.

What does it say now?

In its current form, section 60CC is unwieldy.

Due to the overlap between many of them, I routinely group the section 60CC factors when making submissions in Court as follows:

I note that the above list does not include the factor which applies only if the child is an Aboriginal or Torres Strait Islander child.  For whatever reasons, I have worked on very few matters where this factor was relevant, so it is not something I deal with routinely.

I have worked exclusively in family law for over 11 years (about half that time as a solicitor, and the other half as a barrister).  I find it better and easier to simplify the many factors into 5 essential categories (and, if I recall correctly, I lifted those categories from a judgment many years ago, so I am not the only one who does this).

I can only imagine how difficult it must be for self-represented litigants to understand, and engage with, s 60CC in its current form.

What would the Bill change?

The Bill would dramatically simplify s 60CC, with only 6 factors applying to all children.

The generally applicable factors are:

Almost all of the existing factors are essentially covered (with the notable exception of a requirement in the Bill to expressly consider making orders least likely to lead to further proceedings), but the proposed wording is far simpler and more accessible.

There appears to be an increased focus on safety, but, in my opinion, the change is marginal.  The existing section already requires the Court, when weighing the two “primary considerations”, to give greater weight to the need to protect a child from harm than to the benefit to the child of having a meaningful relationship with each parent.  Same concept, different language.

In essence, the approach to determining best interests would remain much the same, but the section would become much easier and simpler to understand and apply.

Given the horrific rate of family violence in Australia, any increase in focus on the safety of children and the adults in their lives (however small it may be) can only be a good thing.

On balance, these amendments seem pretty good to me.

The Bill would repeal s 61DA.

Section 61DA provides that, when making a parenting order, the Court must apply a presumption that it is in the child’s best interests for the parents of the child to have equal shared parental responsibility (“ESPR”).

The presumption does not apply when there are reasonable grounds to believe that a parent, or another person who lives with that parent, has committed child abuse or family violence.

The presumption can, in any case, be rebutted by evidence which satisfies the Court that it would not be in the child’s best interests for the parents to have ESPR.

We have a bit of jargon in Australian family law.  It seems to confuse a lot of people.

The Act uses terms like “live with”, “spend time with” and “parental responsibility”.  In the general parlance, people in Australia are more likely, in my experience, to talk about “custody” and “access”, terms which are outmoded in Australian family law.

In my experience, with both clients and self-represented litigants, the meaning of parental responsibility is not immediately obvious to most non-lawyers.  Clients are often surprised to learn that parental responsibility relates to making decisions about children, but has nothing directly to do with where a child lives or with whom a child spends time (or when, or how often, or how long for).

However, a lot of lay-people seem to have heard or read about the presumption.  They may have googled family law, and read something about it in a Facebook group or forum, or perhaps even stumbled across s 61DA on AustLII and read it without context or an understanding of what the terms meant.

A great many people seem to be under the false impression that this presumption they’ve heard about means that, by default, the Court will order that a child will have equal time with each of their parents.

What’s the effect of repealing it?

To my mind, repealing s 61DA will have little effect on the majority of families.

The existence of the presumption means that there is a default position, and the evidentiary onus falls on the person who wants to deviate from the default.

It just means that the Court starts with a clean slate, assesses the evidence, and makes a finding as to what allocation of parental responsibility (whether between parents or other adults) is in the child’s best interests.

That is precisely what the Court does now anyway if there is anyone agitating to deviate from equal shared parental responsibility.

I expect that, in the vast majority of families going through separation, both parents will want ESPR, and the Court will continue to order it.

All that changes is that, when there is a dispute about allocation of parental responsibility, there isn’t a party (whether parent or otherwise) who bears a greater evidentiary onus than another party.

In other words, repealing s 61DA would just mean that, when there is a dispute about parental responsibility, each party will be required to adduce evidence in support of their position (which, in practice, happens in most cases already).

This change will likely affect only a minority of cases before the Court.  In those cases, the outcome may be no different, as the presumption might be rebutted anyway.

The small shift in onus might just ever-so-slightly tip the scales of some power imbalances.  For example, a victim survivor of coercive control may have a slightly less difficult time in escaping further exercise of control by the other party by way of decision-making about a child.

The biggest benefit, to my mind, of repealing s 61DA would be an absence of a widely-held misconception that there is a presumption of equal time.

On balance, I think repealing s 61DA is not a bad idea.

The Bill would repeal s 65DAA.

Section 65DAA makes it mandatory for the Court to consider certain time arrangements for a child if the Court orders ESPR.

In particular, where ESPR is ordered, the Court must consider whether an order for equal time is both in the child’s best interests and reasonably practicable.

If, after considering that option, the Court decides not to order equal time, it must then consider whether an order for the child to spend “substantial and significant time” with each parent is both in the child’s best interests and reasonably practicable.

It must consider those options even if no party to the proceeding seeks orders for equal time.

All of this is within the existing framework of the Court being required to make parenting Orders which are in the child’s best interests, and s 60CC setting out the factors to be taken into account in determining those best interests.

In other words, s 65DAA says to the Court something like “you must make Orders in the child’s best interests, and s 60CC tells you what to look at, but in exercising your discretion, you must at least think about these particular options, even if nobody is asking for them”.

If a party seeks an equal time arrangement, the Court will necessarily consider it.  If nobody seeks equal time, why should the Court spend time and resources considering such an arrangement?

The Court is required to make Orders in the child’s best interests.

I’m pretty sure that if, after assessing evidence and hearing submissions about an equal-time arrangement, the Court finds that an equal time arrangement is in the child’s best interests, and that it is reasonably practicable, it will order it, whether or not some section of the Act specifically tells the Court to think about that option.

Conversely, if the Court finds that it’s not in the child’s best interests, or that it is not practicable, it won’t order it.  No amount of mandated consideration is going to change that.

The same goes for “substantial and significant time”.

I’m in favour of s 65DAA being repealed.

[1] s 60CC(2)(a): The benefit to the child of having a meaningful relationship with both of the child’s parents.

s 60CC(3)(b): The nature of the relationship of the child with: (i) each of the child’s parents; and (ii) other persons (including any grandparent or other relative of the child).

s 60CC(3)(d): The likely effect of any changes in the child’s circumstance, including the likely effect on the child of any separation from: (i) either of his or her parents; or (ii) any other child, or other person (including any grandparent or other relative of the child), with whom he or she has been living.

[2] s 60CC(2)(b): The need to protect the child from physical or psychological harm from being subjected to, or exposed to, abuse, neglect or family violence

s 60CC(3)(j): Any family violence involving the child or a member of the child’s family.

s 60CC(3)(k):  If a family violence order applies, or has applied, to the child or a member of the child’s family-any relevant inferences that can be drawn from the order.

[3] s 60CC(3)(a): Any views expressed by the child and any factors (such as the child’s maturity or level of understanding) that the Court thinks are relevant to the weight it should give to the child’s views.

[4] s 60CC(3)(c): Extent to which each parent has taken, or failed to take, opportunities to participate in decision-making about, spend time with, and communicate with the child.

s 60CC(3)(f): The capacity of: (i) each of the child’s parents; and (ii) any other person (including any grandparent or other relative of the child); to provide for the needs of the child, including emotional and intellectual needs.

s 60CC(3)(ca): The extent to which each of the child’s parents has fulfilled, or failed to fulfil, the parent’s obligations to maintain the child.

s 60CC(3)(i): The attitude to the child, and to the responsibilities of parenthood, demonstrated by each of the child’s parents

Matters to Which We Don’t Often Turn Our Minds: Section 85A, Costs Applications in Parenting Matters, and Contempt 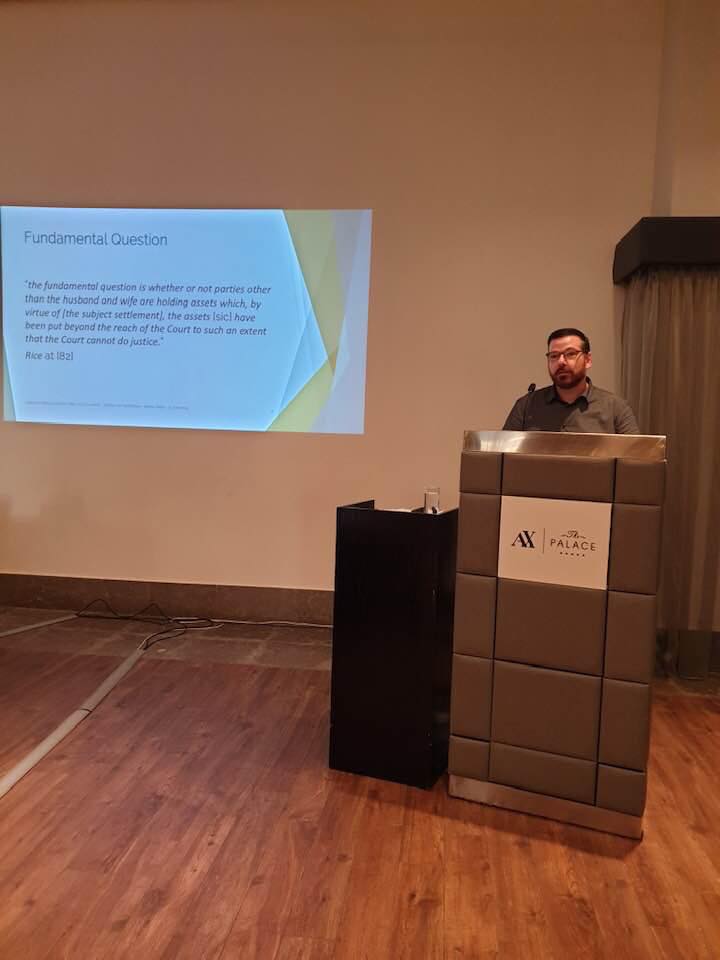 On 12 June 2019, I presented at the JAM Family Law Conference in Sliema, Malta, my paper entitled Matters to Which We Don’t Often Turn Our Minds: Section 85A of the Family Law Act, Costs Applications in Parenting Matters, and Contempt in Family Law.